Our first day in Edinburgh was spent in a tired haze.  A bit blurry-eyed after a marathon of sleep-deprived travel, we pushed through Old Town running solely on delirium and sheer determination to not lose a minute in this beautiful, old city.  But let me back up a  bit…

I sometimes struggle to sleep well before a trip.  Seriously, I can be completely packed, organized, and ready to walk out the door in the morning, but I still cannot manage to unwind and get a decent night’s sleep the night before vacation.  Case in point is this Scotland trip.  Even though everything was all set and good to go for our early morning departure, I still managed to stay up until midnight, wake up at 2:00 am for some conveniently timed tosses, turns, and musings, only to be woken up again at 3:15 am by my darn alarm.  Three hours of sleep before a long day of travel: check!

Our flight out of LAX departed at 9:00 am and arrived in Newark at about 5:00 pm.  After a couple of hours to shake off the first flight, we boarded our next plane destined for Edinburgh.  Being a 7-hour red-eye flight, this would be the perfect chance to catch up on the sleep we so sorely missed the night before.  And if we were lucky (read: if the lack of sleep and melatonin worked together to knock us the heck out), we just might get enough sleep to wake up feeling bright-eyed and bushy-tailed when we arrived in Edinburgh in the morning.  Fast forward to 7:45 am.  Less bright-eyed and bushy-tailed; more bushy-eyed and dragging our tails after another night of not sleeping.   Fun fact: while the aisle seat provides the opportunity to get up and stretch at regular intervals, it also provides the opportunity for passers-by to grab and throttle your headrest at regular intervals.  And let me tell you, melatonin is no match for the rock-solid grip and shaking ability of some of my fellow passengers (Yeah, I’m talking about you, lady in row 32!).   But no worries, the bits of sleep I got between pax attacks added a good 3 hours to my sleep tally, giving me an impressive 6 hours of sleep in 48 hours.  Ready for a long day of sightseeing, WOOHOO! 😛 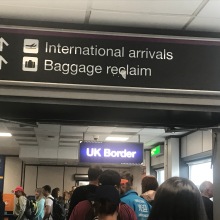 Customs and Immigration took about an hour for non-EU residents.  This seems pretty comparable to the time it took us in Costa Rica, so no complaints from me.  Okay fine,  maybe I complained a little at the time, but I blame it all on the lack of zzz’s.  Once we got through, we quickly retrieved our luggage and made our way to the car rental offices.    And after a preliminary car check, rental paperwork, and a quick prayer not to accidentally drive on the wrong side of the road, we were off to explore!

Our first driving stint in Scotland was a bit of an experience.  It started with a strongly-worded discussion with the GPS system, then relieved cheers when we figured it out, a few wrong turns, and finally arrival at our hotel… 6 hours before check-in.  So we dropped our luggage off, freshened up a bit, and then headed into the city.  Edinburgh is a great city for walking and/or public transportation (if you have a rain jacket and an umbrella handy 😉 ) so we set out on foot, opting to park our car at the National Car Park for the duration of our time in Edinburgh.

Our goal for the day was to walk the Royal Mile down to Holyrood Palace and then Arthur’s Seat.  According to Google Maps, this is only about two and a half miles, so I determined we would be able to tackle it in an hour at a good pace, but more likely two or three hours to incorporate sightseeing.  Yeah, not so much.  You see, my initial calculations failed to consider time spent wandering down different streets, staring into each and every close, gawking at architecture, and photographing each site at every possible angle.  I also hadn’t yet realized that rain would significantly slow our progress and force us (weak Southern Californians) indoors to escape the downpour (more commonly referred to as drizzle).  We ultimately spent a good six hours in Old Town before getting back to our hotel.  My point?  Be sure to plan a lot of time to wander through the streets at a leisurely pace–it’s worth it!

There is so much history to be discovered in Old Edinburgh–I would wager to say that each and every narrow close would have its own stories to tell.  But instead of trying to recount the history (and most likely butchering it in the process), I will simply bring you along on our first Edinburgh adventure with some pictures.

As we were trying to follow Google Maps toward the Royal Mile, we happened to see a sign for Upper Bow and Victoria Street.  Since these stacked streets were already on my sightseeing radar, we abandoned our route and hurried to check out the brightly colored storefronts that line the cobbled street.  Beautiful, huh? 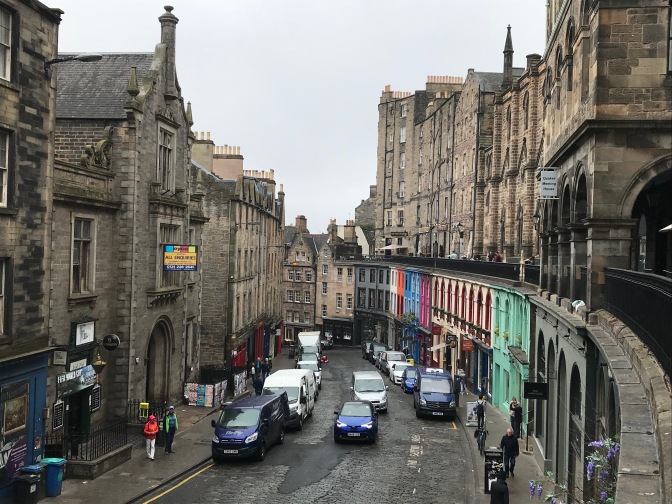 After getting sidetracked by West Bow, we had something of an issue getting back to the Royal Mile.  Google Maps was sending us on a wild goose chase, and the rain started coming down.  We ultimately ended up asking for directions and learning that we were just a block away.  And do you know what else was about a block away?  Lunch, that’s what!  We stumbled upon the Royal McGregor, which is a small pub about midway down the Mile.  Trip Advisor reviews assured us that we would not be let down, so in we went.  And here is where we had our first Scottish meal.  It was cold and wet outside, so no better time than to hit up the comfort food: steak and ale pie for me, fish and chips for the hubby, Scottish breakfast, and the royal club sandwich for our friends.  The food was tasty and managed to give us an extra boost of energy to keep on truckin’ on our first walking tour. 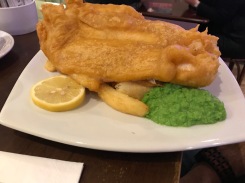 A little way up the Royal Mile sits Canongate Tolbooth, built in the late 1500s as the burgh of Canongate’s main public building.  It served as a meeting place, a courthouse, and even a jail.  These days the building houses a tavern and a museum.  Sadly we did not get to visit either (keeping to that strict 1-3-hour walking tour I imagined, of course), but I’m glad we took a few minutes to appreciate this piece of Edinburgh’s history.

A short walk east from the Tolbooth brought us to the Canongate Kirk.  This church was built in the late 1600s, and its Dutch-style gable sets it apart from the surrounding structures.

A Few More Sights That Caught the Eye Along the Way 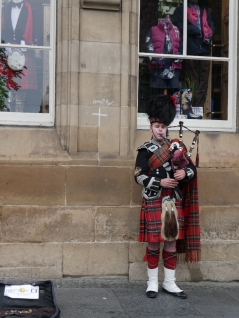 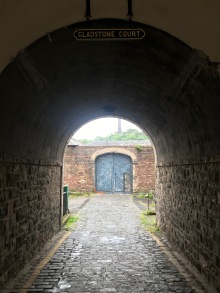 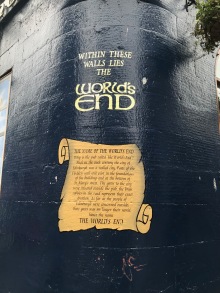 Our walk down the Royal Mile concluded at The Palace of Holyroodhouse.   This beautiful palace is not only the Queen’s official residence in Edinburgh, but it is also home to some pretty significant history.  I was particularly excited to visit, as Holyrood houses the royal apartments of Mary Queen of Scots.  I have been geeking out on a Mary Stuart biography (Queen of Scots: The True Life of Mary Stuart), and I was just itching to catch a glimpse of where much of her short-lived reign in Scotland played out.  The self-guided tour at Holyrood took us through many of the public rooms, all fascinating if you have any interest in the royal history of Scotland.  Toward the end of the tour, we found ourselves in the 16th-century north-west tower where–you guessed it–Mary Stuart resided.  Cue my inner happy dance and maybe a few tears, screams, and hair-pulling à la 1960s Beatlemania.  Unfortunately, no cameras are permitted inside of the palace, so I have no pictures to share, but if you are curious, you can check it out on Holyrood’s website.  Once we headed outdoors, phones and cameras were welcome once again, so I can at least share some pictures of the 12th-century abbey and the outside of the palace. 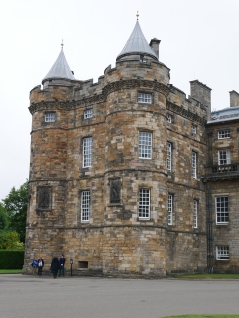 proof we were there 😉

And this was where our Royal Mile tour ended.  We were more than ready to relax and clean up before heading back out for the evening, so we set our course to the hotel and pressed on toward the promise of a hot shower, clean clothes, and somewhere comfy to collapse.

Not Done Yet–Just a Bit More!

The optimistic planner that I am, we booked a haunted tour for our first night in Edinburgh.  Having already paid for our tickets, we were not too keen on skipping the tour, so we threw back some coffee, put on our game faces, and headed out once again.

From our hotel, we walked around Castlerock to Grassmarket, up West Bow, and then to High Street (aka The Royal Mile).  We said hello to David Hume, sampled some cullen skink at the Halfway House, ogled St. Giles Cathedral, and then met our haunted tour guide at Mercat Cross. 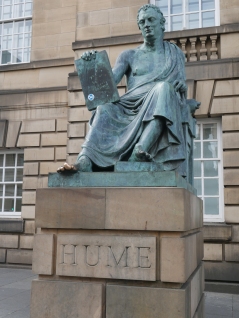 Hume statue–be sure to rub his big toe 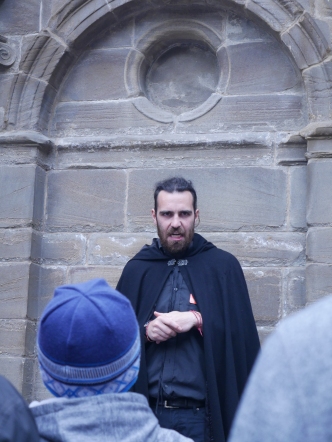 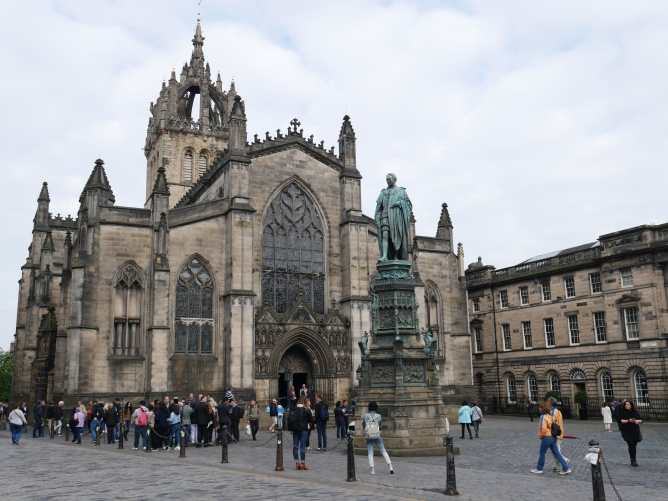 Alun our tour guide regaled us with stories of Edinburgh’s dark history and the ghosts that refuse to leave.  We wandered through closes and then headed down into the Blair Street Vaults, where some of the seedier residents of Edinburgh once conducted their nefarious business. 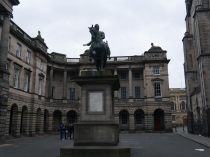 When our tour ended and we emerged from the vaults (with everyone unscathed–phew), we headed home.  As the sun had finally started to set, we were treated to beautiful views of Edinburgh Castle lit up for the night.  What a perfect ending to a long, but wonderful first day in Edinburgh! 🙂

5 thoughts on “Day One in Edinburgh: The Royal Mile”