Just 45 minutes away from Edinburgh is the royal burgh of Culross. I loved wandering through the cobbled streets and soaking in the historic charm of the buildings. You can see more of Culross on the blog 👍🏻 - - - #scotland #uk #fife #culross #royalburgh #cuileannros #cranesmuir #outlander #travel #vacation #holiday
Flamingo drama! #flamingo #drama #sandiego #california #seaworld #seaworldsandiego
At the end of our time in Edinburgh, we headed up to Arthur’s Seat. I love the views along the trail, especially with the treat of blue skies to brighten everything up 😍 More of Arthur’s Seat on today’s blog! #edinburgh #scotland #unitedkingdom #uk #arthursseat #gorse #bluesky #beautifulday #hiking #holiday #vacation #sightseeing
Dean Village in Edinburgh is the perfect place for a stroll. Bonus when the weather is nice! You can see more of Dean Village and Edinburgh on today’s blog post. - - #deanvillage #edinburgh #scotland #blueskies #sunnyscotland #wishiwasthere #waterofleith #holiday #vacation
I’m still daydreaming about our Scotland trip (and will be for a long time, I think). 😍 I loved visiting the 12th century Holyrood Abbey in Edinburgh. You can check out more of Our first day in Edinburgh on the blog! #scotland #edinburgh #holyrood #abbey #history #travel #vacation #wishiwasthere
When the temperature gets up to 94 here today, I’ll sure be missing the cool weather in Scotland! #scotland #sligachan #skye #isleofskye #travel #wishiwasthere

About a year and a half ago, we had the great misfortune of spending a day in St. Croix. Ha!  Yeah right, I mean, take a look at this place.  This USVI island is beautiful and we could not have hoped for a better port or a more lovely day!

When we first planned St. Croix, I was not being very ambitious.  There were two places we wanted to visit, the Domino Club and the Cruzan Rum distillery.  Rather than try to fit both into the schedule, I figured we could choose one of the two and then have a taxi drop us off to check out Frederiksfort.  Then a little meandering around Frederiksted to appreciate the colorful buildings, finally ending up at a beach.  Sounded like a nice day, not too taxing.

When we docked in St. Croix, the skies were a little gloomy and rain seemed like a sure thing.  Did we really want to venture out and get poured on??  Then we saw what seemed like a perfectly nice touristy shopping area nearby.  Hmmm, maybe we could just stay nice and dry near the port…

Well, we ultimately decided to press on and see some of St. Croix.  In your face, rain!  😛  And as we were standing around thinking we should probably look for a taxi to take us to Cruzan, my brother-in-law (who is a get out there and meet the people kind of guy) had wandered off to chat with some locals.  He wound up talking to a guy, who told him about another guy, who pointed over to another guy named Rudy, who was apparently the man to see about a ride.  I’ll be honest: this made the OCD planner in me twitch a little, as I prefer to stick with tour operators that are vetted and highly reviewed.  But after a quick group discussion about the the price, the itinerary, and childhood warnings of not getting into a strange van, we threw caution to the wind and headed to Rudy’s van!

And here is where I have to give my brother-in-law some major points since our tour with Rudy was terrific.  He took us around the island, shared great info with us, and made sure that we were able to visit both the Domino Club AND Cruzan Rum Distillery!  Score!

We started out driving through the town of Frederiksted and then down some narrow roads into the rainforest.  Check out this Google Earth View of the drive.  Green, green, green!

The drive was not too long and we arrived at the Mt. Pellier Domino Club in under half an hour.  Since we were not the only ones in the van, we were running on the tour operator’s timetable, but we were still given plenty of time to relax, enjoy the atmosphere, and say hello to the famous beer-drinking pigs!  Yes, you read that right: beer-drinking pigs!   O’Douls, of course!  😉

When we were taken to see the pigs, we were given some strict instructions.  No videos (without forking over some extra cash) and don’t try to pet the pigs.  That second rule was a tough one for me since I am an animal lover, but I preferred to keep all of my fingers that day, so I obeyed!

So basically what happens is those who have bought the piggies an O’Douls get to give the pigs the beer.  The pigs then proceed to puncture the cans, drink, foam at the mouth a bit, and then spit out the can.  They then eagerly await their next drink.  Pretty crazy!  And for the record, these seem to be some pretty happy pigs and they are reportedly very well-cared for! 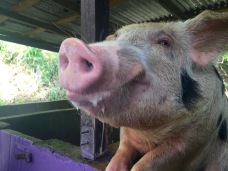 In addition to visiting the pigs, the Domino Club is a great place for a meal and/or a drink.  They offer home-cooked island food and a special drink called Mama-Wanna.  We were too early for lunch, so I can’t give my personal review, but in reviews I have read, people have reported that the food is great!  If we make it back to St. Croix, I would love to head back here for lunch and of course another visit with the pigs!

From the Domino Club, we headed out to the Cruzan Rum Distillery.  As you can see by their sign, this place has a relaxed, don’t hurry atmosphere.

We learned that they really take their don’t hurry attitude seriously, as our tour was fairly late to get started. But we did not mind too much, as the waiting area is comfortable and they even have lawn games to keep you entertained.  Once we got going, we found the tour to be excellent.  Our guide was friendly and informative, and we were taken through their rum-making process in a very up close and personal way.

At the end of the tour, we were taken into the barrel room for a lesson about the different varieties of Cruzan.  After that, it was back to the pavilion for tasting and shopping for those who were interested.

One of the things that I love about visiting the Caribbean islands is that everything is in a beautiful setting.  So you can go see something industrial like this rum distillery, but it is set amongst historical sugar mills and framed by palm trees!

Okay, so I can’t remember exactly what we had had in mind for lunch in St. Croix, but we ended up deviating from the plans and heading to The Chicken Shack, a small local restaurant not too far from Cruzan.  We had asked a gal who works at the distillery and she said that The Chicken Shack was one of her favorite places for lunch.  This small restaurant was a winner, definitely not touristy and we got one heck of a good meal!  I think we ordered a combo of 1/2 a chicken, potato salad, and beans.  We threw in some Johnny cakes as well, because you’d be crazy not to!  Two of us shared this meal and walked away full! 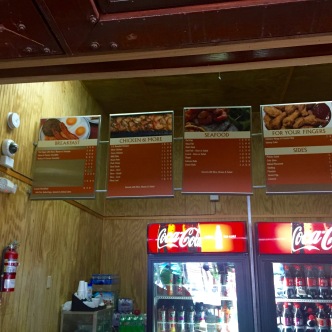 the Chicken Shack menu–simple, but delicious! 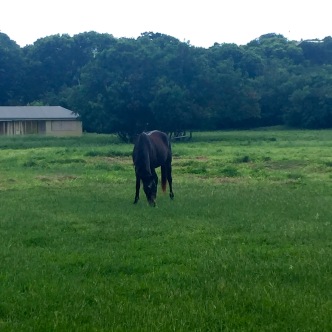 right outside of the Chicken Shack

Back to the Ship

As the saying goes, all good things come to an end, and so did our tour of St. Croix.  Our driver dropped us off near the port, where we were able to browse the shopping area we had spied that morning.  We also got a few more pictures before the rain finally came down.  I love these two pictures–the nice brick work, the bright colors, and the archway to nowhere…

As we were headed back to the ship, we caught this great picture of our ride, The Adventure of the Seas.  And what’s that over to the left of the picture?  A sinking boat?  Doh!

As we sailed away, we were treated to this lovely sunset beneath the billowing  clouds.  I think a majestic sunset is always a nice way to say goodbye to an island!

7 thoughts on “A Day in Saint Croix, USVI”