Bell Rock at Sunset 😍 Well done, Sedona!
Chapel of the Holy Cross in Sedona,
The view here in Sedona Is not too shabby. 😍
Just 45 minutes away from Edinburgh is the royal burgh of Culross. I loved wandering through the cobbled streets and soaking in the historic charm of the buildings. You can see more of Culross on the blog 👍🏻
Flamingo drama!
At the end of our time in Edinburgh, we headed up to Arthur’s Seat. I love the views along the trail, especially with the treat of blue skies to brighten everything up 😍 More of Arthur’s Seat on today’s blog!

So now that you read all about our planning and packing for Costa Rica, I suppose it’s time to tell about the actual trip!  See this awesome picture of the plane’s wing as we head away from LAX??  It’s proof that the trip actually happened.  Woohoo!

So first of all, let me tell you that our red-eye into Costa Rica was wonderful!!  Our flight did not leave LAX until almost midnight and by the time we were actually seated and buckled, most of us were OUT!  I had to practically force my 5 year old to stay awake for takeoff.  I learned a very important lesson here: 2 sleeping kids on a plane = bliss!  Another great thing about this flight was pre-boarding.  I would usually have no interest in this (because as far as I am concerned, the less time onboard, the better!) but when we were dragging 2 rolling carryons, 2 little kids, 2 carseats, a backpack and a purse, we were definitely appreciating the opportunity to get situated without having to elbow any strangers passing by in the aisle!  After our 3-hour flight, w had a long layover in Houston and then only a few hours flight from IAH to San Jose.  Not too shabby of a flight schedule!

Once we got to SJO, it was time to go through dreaded customs.  The line was so long, but we just gritted our teeth and started walking up to the line.  I mean, you gotta do what you gotta do, right?  Or do you???  A kind customs agent walked over to us and informed us that we could go through a different line since we were traveling with small children.  WHAT?!?!?   So we went with the kindly customs saint and, no joke, we made it through our line in less than 10 minutes.  I don’t know if this is the system everywhere or just in Costa Rica, but we definitely appreciated it!  Luggage was not so fast (soooooo many bags to find for our group of 12 people!), but how can you mind when you are in Costa Rica?? 🙂

From the airport, we found our ride (aka: biggest van possible) to take us to our beautiful home away from home on Playa Agujas.  The drive wasn’t too long, about an hour and a half, and the scenery was just beautiful!  On our way to the house, we made a stop at the Tárcoles bridge to check out the local cocodrilos.  Despite the narrow walkway and the traffic rushing by, this was an extremely worthwhile stop!  And total bonus: nobody fell over to become a crocodile snack! 😉

The House on Playa Agujas:

After our little visit with the crocs, we headed to the house.  We could not help but ooh and ah  as we passed the lush green hills and beautiful coast, having no idea that we were just scratching the surface of Costa Rica’s beauty from the tinted windows of our van!  Here are a few pictures of the road to the house and then the views from our house.

the field of cows near the house

the super-bumpy-but-still-awesome-road to the house 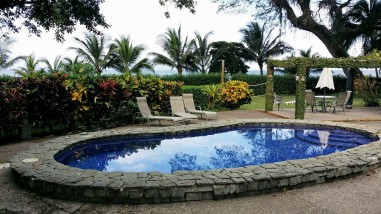 Pretty amazing, right???  Now all those plans we had for day trips were sounding like a terrible idea because really, who wants to leave the house when it looks like this???  Not me!  But as much as we would have all stayed here in our little haven, we did finally leave to explore some more areas of Costa Rican beauty.

Out and About in Manuel Antonio:

Our first major outing was the the Manuel Antonio National Park, which is about an hour and a half south of Jacó.  We had booked in advance with the amazing Johan Chavez (check out his website here) as a guide and planned to meet there at 7:45am.  Getting there was an adventure in Costa Rican driving, during which we learned the joys of getting stuck behind slow trucks on one-lane highways.  But to be honest, I cannot imagine more beautiful countryside to stare at as you drive 30 mph down the highway!

Once we were there, Johan met up with us and took us through the park, educating us on the local plants and animals. With the help of his spotting scope, he showed us all kinds of animals, from sloths and monkeys to the tiniest of bats hiding under leaves.  Most of the following pictures were taken by Johan and shared with us.  There is no way we could have gotten such beautiful pictures of the MANP locals, so thank you to Johan!!!!! 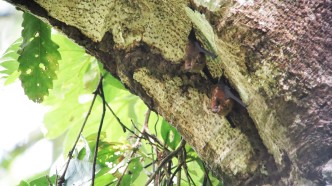 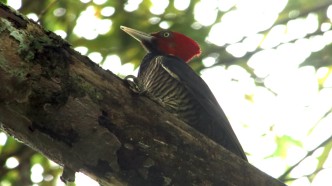 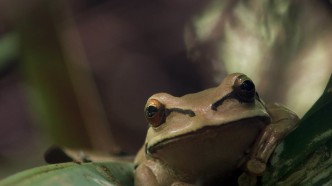 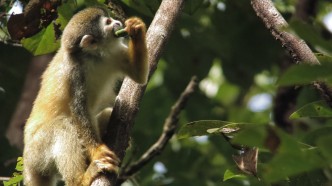 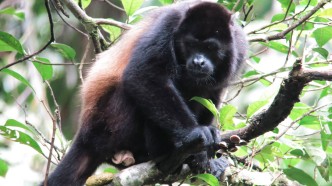 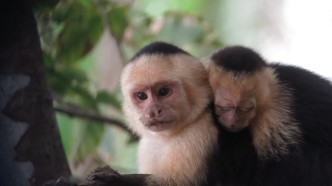 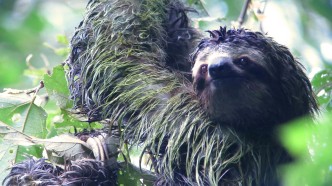 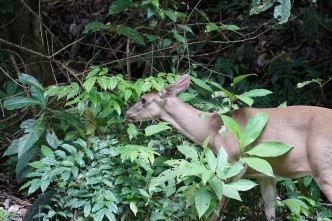 At the end of the tour, he deposited us at one of the 3 beaches so we could relax for a while.  By “relax” of course I am talking about defending our belongings from monkeys and raccoons!!!  Well, I guess only a few of us were stuck playing sentry–the rest of us played in the waves. 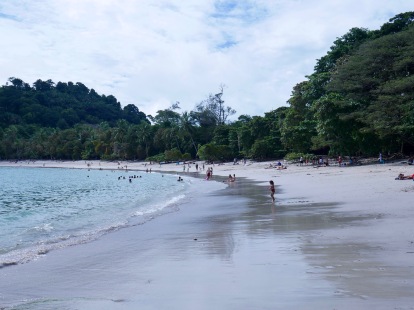 Is this monkey a thief or just curious???

Some raccoons and a monket getting ready for a turf fight–I wonder which ones are the sharks and which are the jets???

On the way home, we stopped at an awesome restaurant called El Avión.  We had had other plans for lunch, but thankfully our Air B&B host had suggested this place.  So glad we took his advice–there’s nothing like eating lunch at an airplane and looking out over the jungle and Pacific! 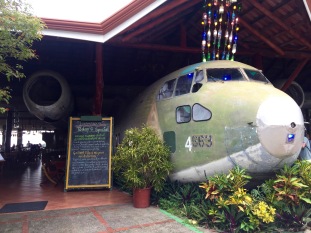 On the way home we also got to see what happens when a bridge is out and your GPS stops working (lots of unplanned sightseeing!).  And of course I can’t forget our surprise encounter with Costa Rica’s police department!

See the police in the background of the picture?  They’re pulling us over right there.  Thankfully it was just a routine check for identification and we had our passports with us. Phew!  For anyone planning to drive in CR, be sure to always keep your passport on you!

In the next post, I will take you to Jacó and Tárcoles!