One of my favorite places to be when we sail into port is at the very front of the ship.  This is where you can get the perfect view of the island as it transitions from a speck on the horizon to the beautiful island awaiting you.  The front of the ship is also the location of the fitness room, where you can hop on the treadmill and quite literally race to the next island.  And more practically, it is a great place to help ensure that your clothes still fit on day 7 of the cruise. 😉

So on a bright and beautiful Sunday morning, as I trotted along on the treadmill, I was able to watch as the beautiful island of St. Thomas grew from a collection of tiny mounds in the distance to the beautiful verdant island where we would spend our day.

Once we were cleared to exit the ship, our group of 8 headed all the way down to the deck one gangway.  We scanned our cards, checked out some towels, and headed off to meet our driver for the day.

You may recall from an earlier post that we had hired a private tour guide.  There are many tour options on the island, but we really wanted to go with our own itinerary and timetable.  We found a good deal through Islander Taxi Services, paid in advance, and then prayed that our driver actually showed up.  Which he did.  Thank goodness!  🙂

We met our driver, Warrington, outside of the cruise terminal security gate.  He was prompt and friendly, immediately asking us where we wanted to go for the day.  We told him our main points of interest and he quickly came up with a schedule that would work best. We loaded up the chariot, and off we went…

Our first stop was to a lookout point called Mountain Top.  Here you can find pirates, souvenirs aplenty, banana daiquiris, and phenomenal views of the island.

As we headed away from our perch at Mountain Top, we made a stop at Drake’s Seat.  These days Drake’s Seat is just another vista point for spectacular views of Magen’s Bay, but back in the day it was Sir Francis Drake’s vantage point as he kept watch over the bay. 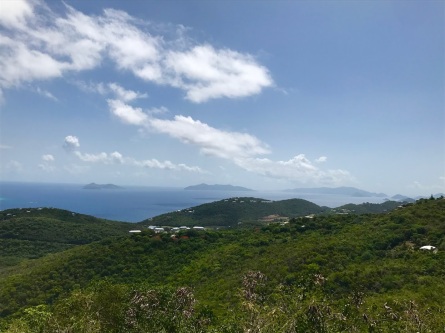 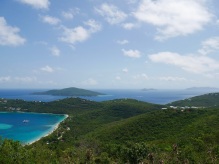 Our next photo stop was at the Skyline Drive Lookout.  This stop provided a view of the Caribbean side of the island.   From here we were able to see some small cays and islands, our ship, and dozens of boats out enjoying the beautiful day.  There are several vendors at this lookout point, so in addition to the gorgeous views, you can pick up some souvenirs.

We were very excited to visit Magen’s Bay Beach, as it is reputed to be one of the most beautiful beaches in the Caribbean.  Admission to the park was $5 per person, which includes access to the beach and the facilities.  There is also an arboretum, which I believe is also included in the admission, but for our purposes, all we needed was a patch of sand and that perfectly calm & clear water. 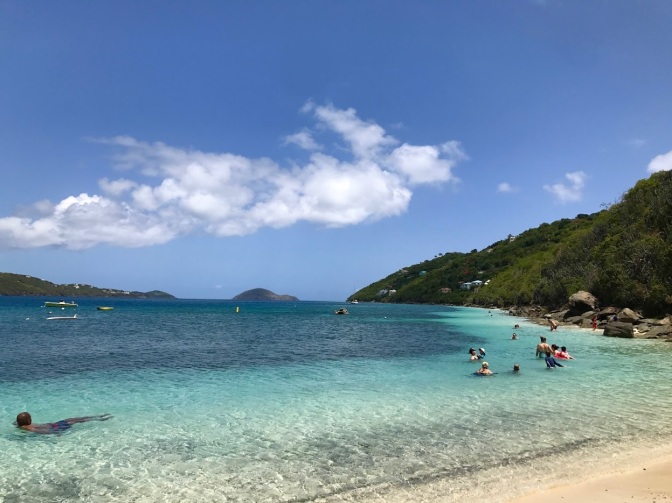 We stayed here for about two hours, floating contentedly in the sea.  After a while, we grabbed some food at the snack bar, and then back into the water until the very last possible moment before having to head back to our bus.  And I’ll tell you what, if you ever want a challenge, try getting me to leave 83 degree water willingly.  I may be small, but I’ll put up a fight! 😉

Another stop we had been looking forward to was the 99 Steps that lead up to Blackbeard’s Castle.  Having no intention of paying the admission fee to the castle area, we thought we could climb these old steps and catch a glimpse of the historic landmark from the top.  And even if we did not see much of the castle, we would at least have the satisfaction of knowing we were following in the footsteps of famous pirates.  Unfortunately his did not work out so well for us.  Our driver dropped us off at the top and had us walk down.  The steps, seeming quite ordinary and not at all what we would expect of a centuries-old pirate passageway, threw us off.  We were not sure if we were even in the right place.  So we meandered down the stairs and met our driver at the base of the steps.  Not so piratey, Argh!

heading down the “99 steps” 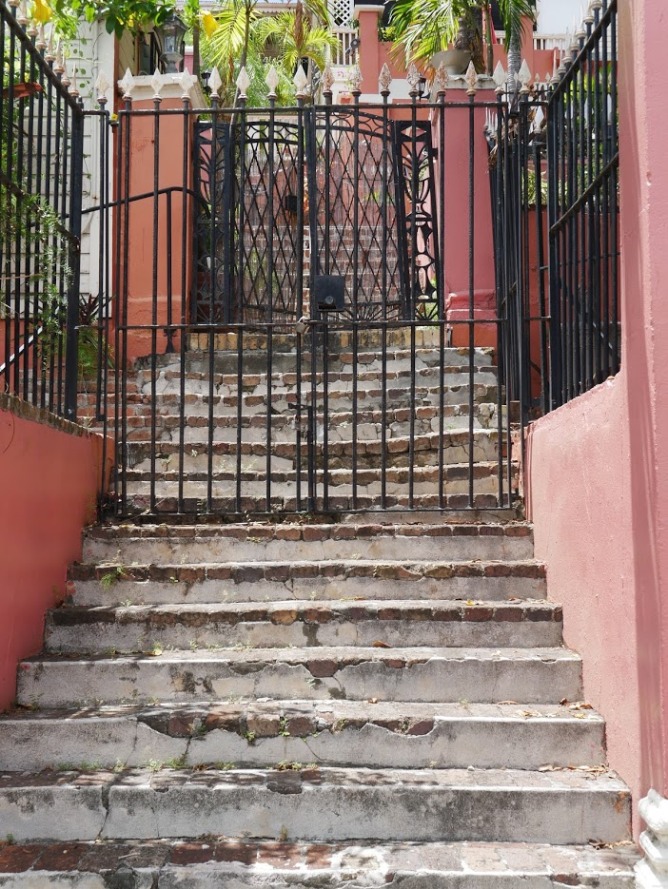 some other steps that look a little more piratey

We wanted to make sure that we had lunch at a good local restaurant.  Being that it was Sunday, many restaurants were closed, but Gladys’ was open, and we are so very glad because it turned out to be a great little cafe.  Set in an historic area of Charlotte Amalie, the cafe has a perfect combination of historic charm and Caribbean flair.  Most of us ordered the chicken roti, which is one of my very favorite meals to get in the Caribbean.  It is a burrito of sorts, filled with meat and potatoes with a curry sauce.  For a little extra kick, we drizzled some of Gladys’ world famous hot sauce on top.  So, so, so delicious ❤

One nice perk to having a private tour guide is that you can make really random stops.  Like a K-Mart run.  Turns out that none of the fellas in our group had packed pants for the cruise.  And it turns out that the dining room staff on the Adventure of the Seas is cracking down on the dress code.  So just an FYI to anyone who finds themselves in need of inexpensive pants, head to the K-Mart in St. Thomas.  🙂

Back to the Ship:

Well, as is always the case, we eventually had to head back to the ship.  So sad, I know.  But after a full day of sun and sightseeing, armed with full stomachs and new pants, we were ready to return to the Adventure.

Back at Crown Bay, we said our goodbyes to Warrington and dragged our feet back to the ship.  We scanned our cards, went through security, returned our towels, and trudged up 10 flights of stairs to get to our rooms.  We headed out to the balcony to enjoy the last views of St. Thomas as we departed. 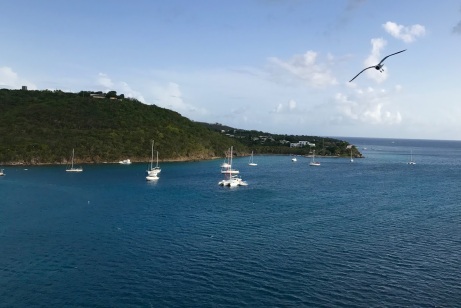 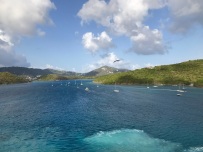 14 thoughts on “Cruising the Southern Caribbean: A Day in St. Thomas”